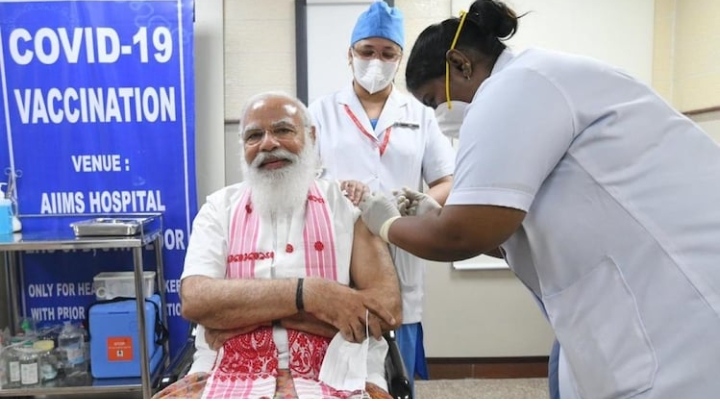 – PM Modi’s joke to AIIMS staff in too late

New Delhi, DDC. Prime Minister Narendra Modi on Monday morning at the All India Ayurgy Institute in Delhi (AIIMS) Arriving for the first dose of corona vaccine. At the time of getting the vaccine, PM Modi told the nurse that the leader is of thick skin, So thick needle. Let us tell you what was the whole sentence before and after applying the vaccine.

Had fun with the nervous staff
The medical staff was nervous when PM Narendra Modi arrived in AIIMS in the morning. To be nervous, PM Modi asked the nurse what is your name and where are you from? To this the nurse replied that she is Puducherry and her name is P Niveda. P Niveda gave PM Modi the first dose of the vaccine. Earlier PM Modi laughed and said whether he was the needle used for the animal Will use PM Modi’s Tanja could not understand the nurse

A little late thought Modi’s joke
After this, PM Narendra Modi said that the skin of politicians is very thick, So some special thick needles are not going to be used for them. The nurse laughed at it. When PM Modi was vaccinated, he told the nurse that he was vaccinated, But I did not realize. PM Modi kept smiling during vaccination

Neither stopped, nor diverted traffic
The second phase of corona vaccination has started from 1 March 2021. As soon as the public’s turn came, So Prime Minister Narendra Modi came forward and got the first vaccine. Prime Minister Narendra Modi arrived in Ames in the morning. No traffic diverted, No one was stopped. PM’s car ran on the empty streets in the morning. One could not think that PM Narendra Modi would reach AIIMS in this way. PM Modi was welcomed by AIIMS Director Dr. Randeep Guleria did. Then he arrived directly in the chamber where he was to be given the vaccine.

Dakiyaa News promises to be a fair and objective portal, where readers can find the best information, recent facts and entertaining news.
Contact us: dakiyaa.com@gmail.com