Home Business Now you will take tax from tuber 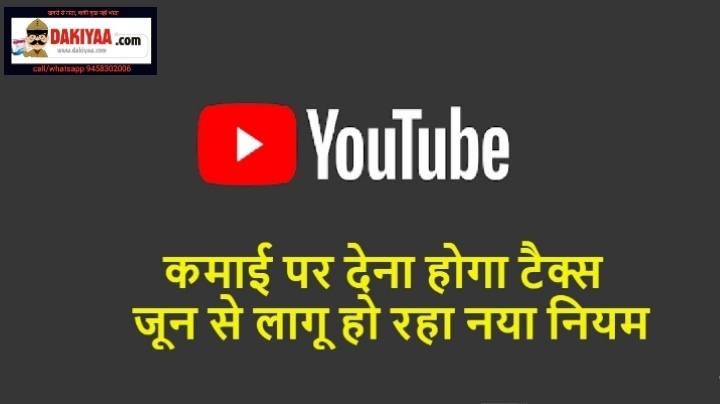 – Preparation to tax the earnings from the video

News desk, DDC. Uploading videos to YouTube is bad news for earners. Google scissors are soon to be run on the earnings of millions of crores from the video. Now U-Tuber will have to give a rough share of its earnings to Google. Now 15 to 30 percent on total earningsWill have to pay tax till.
U-tubers of India are under the tax net
YouTube yet (YouTube) But video makers do not have to pay tax but will have to pay tax soon. YouTube has now decided to collect tax from YouTube creators outside the US. That is, if you are a Utuber of India, then you have to pay tax, However, the relief is that you only have to pay taxes of the same views that you have received from American viewers. The thing to note here is that American creators will not have to pay tax.
New policy will come into effect from June 1
In easy terms, you are a Utuber of India and someone in America is watching your video, then you have to pay the tax of your earnings from this view to YouTube. The introduction of YouTube’s new tax policy has been in force since June 2021 i.e. 31 Deadline until May. The company has also made videos about the New Testament and shared it with its Twitter handle.
If not given information, there will be 24 percent deduction
YouTube has also asked video creators to submit tax information to the AdSense account. Most importantly, if you do not provide your tax information by 31 May 2021, the company will deduct up to 24 per cent of your total earnings

Tax treaty from America and your country
This rule of YouTube is different for different countries. The tax rule depends on whether America has a tax treaty with your country. In the case of India, if you give tax information and claim tax treaty So your tax will be reduced by 15 per cent on views from American audiences. At the same time, if a creator gives tax information and does not have a tax treaty with the US, then the earnings from American viewers will be taxed up to 30 per cent

Dakiyaa News promises to be a fair and objective portal, where readers can find the best information, recent facts and entertaining news.
Contact us: dakiyaa.com@gmail.com